After a summer break the concept FWR will be converted in FWR GmbH – after 5 years intensive preparation.
Consciously the founding takes place in the year of 100 years Bauhaus.
From 2020 on FWR will be available. The total cocept still is avantgarde and having said this very early for ist market. So it will still take a lot of time or „the investor“ to make it happen in everyday environment.
We see enormous momentum from 2025 on.

Conclusion of all conceptal work based on all experince out oft he last 5 years.
Idea, concept and implementation are tested on the market. Partner are ready to integrate the idea, to contextualize the concept on a broader field and to fulfill production and logistics.
2020 this web site will be converted to a consumer web site including an online shop.

Acquirement of a FWR showtruck.

Coordinating a common communication with T+T.

Start to construct a Fachwerkraum house as show house.
Starting conceptual work together with T+T.

First contact to T+T sliding elements. FWR shall be combined with another project featuring Bauhaus and clients for „furnitecture“.

Hints to create it:

All topics of FWR furnitecture beyond „small room“ and „tiny house“!

Selection of the investor. Invitation to potential buyers into the new space. Registration of Fachwerkraum furnitecture as international patent.

Installation of the new showroom/headquarter.

Strothman carpentry is offical installation partner. Deinstallation of the showroom Strothmann for the new headquarter Fachwerkraum in Bielefeld, Sauerlandstr. 7.

Besides the beehouse in Switzerland (4 people on 12 m²) there is now a show room at the Baltic sea in Heiligenhafen installed.

Inviting partner in context of MOW, Möbelmeile and Area 30

First visit to an outdoor show. („gardiente“ in Frankfurt) 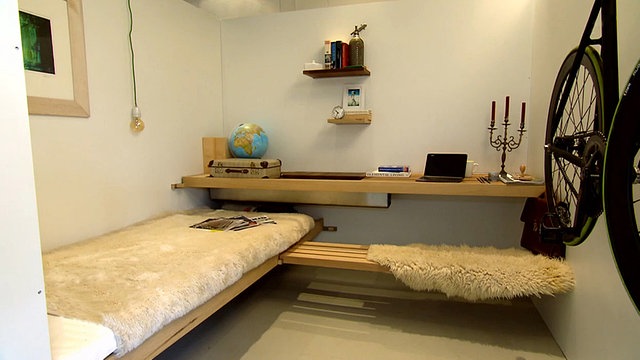 Get together of all network partner. Deciding to marketize the total programme „Fachwerkraum“ in 2017.

Strengthening the network by a sales department.

Creating a basic structure for a large scale production.

Visiting all partner sorted out and informing about further action as well as about the network. Discussing production and sales in the corresponding fields.

Reorganizing the structure of partner and business model respecting results of the new business plan and ZOW.

„Making of“ businessplan and participating in the regional contest: Startklar OWL.

Preparation for contests and shows 2016 such as „future city“ (Fraunhofer Institut) and „ZOW“ (Bad Salzuflen).

Delivery of „50 rooms“(material) for samples and references.

Have a nice summer holiday!

» Moving into the headquarters of FACHWERKRAUM:

Warehouse and mobile showroom exist already. Workshop and office will join these up to the end of 2015.

FACHWERKRAUM is a registered European brand / registered trademark: No 013644241

Simple handling and lots of variability

The location for this premiere has been programmatically selected: FACHWERKRAUM is a metal profile system as a foundation for carpenters and interior designers for the efficient furnishing of limited spaces.

We develop the corresponding profile as a foundation for the interior furnishing of limited spaces and look after the marketing. The added value from FACHWERKRAUM stays just about exclusively in your hands.

Not only the product, but also the utilisation is presented for the first time in Hall 4.2, Aisle E, Stand 15 in connection with the Federal Ministry of Economics specially created terrain “Young, innovative companies”

For this we completely furnished a container: Bed, bench, table, racks, shelves, coat rack … everything you need but on just 4 m².

Convince yourself of a totally novel concept, with its variability, not forgetting to take efficiency, ecology and trends into account – a concept that will help you set standards with your work.

We are looking forward to meeting you at our “nucleus” at the Interzum and invite you to visit us.

Determining of woodwork businesses as partners for the development of the room concept, coordination with the Cologne Fair and the Federal Ministry of Economics, conceptualization of the stand for the fair and the media

„Standard furniture is a thing of the past – today’s customer wants to set his own personal accent by means of a wide variety of size, measurements, colours, structures, modules, decors as well as mounted and additional parts“

Iindividualisation was the focus theme of the ZOW. It would also be the FACHWERKRAUM theme if the functional and visual enlargement of limited spaces was not already the main focus.

» From the final report of the BAU

„Product solutions along with system solutions for the increase of energy and resource efficiency, environment and resource-friendly materials … were set center stage. Getting away from the technological and functional theme, it was particularly about how one shapes life and work in the city of the future"

This statement from the BAU 2015 is exactly in keeping with the solution approach of FACHWERKRAUM. Besides a thank you to our initiation partners and further exhibitors, interested in our project, we have nothing more to add.

The limited space is by definition cozy. However for the stylists among furniture designers “clean surroundings” belong indispensably here, spaces which can then be richly filled with ornaments. This is exactly what FACHWERKRAUM allows for.

Black is back – or grey – or even houndstooth: When this is set systematically as an upholstered module, it is a wonderful contrast to the otherwise bright small room.

When your „private office“ should not be in your bedroom, then FACHWERKRAUM offers many convincing concepts to turn your junk room into one – even creating space for your visitors.

As we threaten to get lost in virtual room, we want to touch and be touched by our surroundings. FACHWERKRAUM is a partner for original carpenters and a playground for originals, reality and granny’s bric brac – just true values really!

The bathroom is quite often a smaller place however with FACHWERKRAUM it becomes a small room, which should not only collect carpets and chairs, but increase its living value decidedly with the efficient FACHWERKRAUM concept.

Along with motion sensors and app-operated functions, we mean the lighting here. FACHWERKRAUM allows furniture to float. This is even nicer with the planned lighting concept.

Metal as a material and colour is back again. The heart – the interface of FACHWERKRAUM – is made from aluminum or stainless steel. At the same time we see visual austerity or with different modules opulence is also demonstrated: Bronze, silver gold!

As a targeted contrapoint it understands itself aptly with the linear “no nonsense” Bauhaus character of FACHWERKHAUS. The structure offers a basis for experiments in smaller spaces.

Apart from cradle to cradle – the demand of FACHWERKRAUM offers the admittance of modules for a perfect foundation for upcycling. The system innate griding benefits from the necessity of structure at the same time, highlighting the top quality of the upcycling solution.

This trend should have been noticed by the visitors themselves and as they were called upon to visit the House of Neri & Hu. The “guest of honour interiors on stage” created various high, small rooms with their own furniture at times. Did they know about FACHWERKRAUM … ?

In the Mekka of the furnishing industry, Bielefeld, we started a new company FACHWERKRAUM – the high-quality furniture module system for limited spaces.

The new furniture system is based on the following considerations:

FACHWERKRAUM eliminates these deficits and uses the actual facts of limited spaces optimally, to increase the living value. The solution-orientated approach to size animates architects, interior designers and carpenters to a wide variety of individual bracing. It includes existing architecture. FACHWERKRAUM uses the newest techniques and sets ecological measures according to the “cradle to cradle” principle.